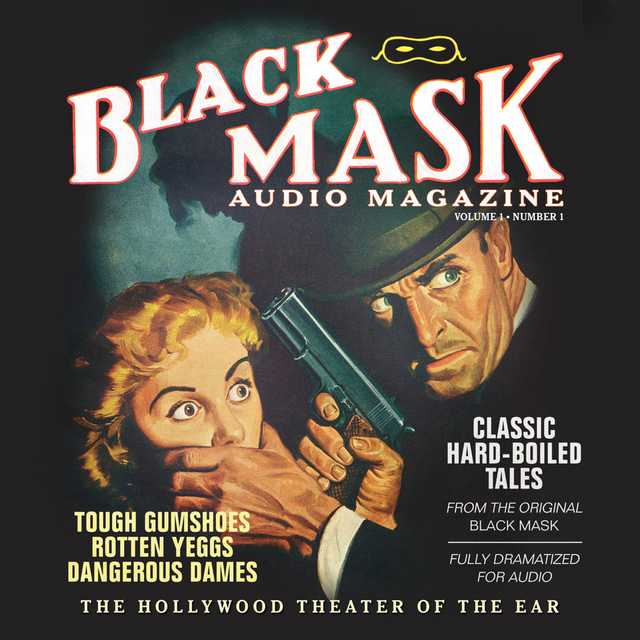 In the 1930s and ’40s, Black Mask was the single most important magazine for the modern mystery field. In its pages writers such as Dashiell Hammett, Raymond Chandler, and Earl Stanley Gardner reshaped the established view of mystery fiction, creating the “hard-boiled” private eye. Now comes this series in which the toughest of tough detectives are resurrected from its pages in sonic dramatization from the award-winning Hollywood Theater of the Ear.

”Lost and Found” Did a spoiled rich girl die in a plane crash, or is she hiding with her homicidal lover in the Florida Keys? Whose body is that in the wreckage? Who put it there?

”Black” A big-city tough guy comes to a small Minnesota town to settle a deadly fight between the local crime boss and his chief rival—his son.

”Pigeon Blood” A society matron’s life is threatened after she engineers the theft of her own priceless jewelry to pay off a gambling debt. Only a debonair connoisseur of crime can save her and recover her gems—for a price.

”Taking His Time” In this comic vignette, a carnival barker’s valuable watch gets stolen during an illegal poker game. The local sheriff seems in no hurry to apprehend the thief, until a reward is offered.

”Rough Justice” Mississippi heat—A Manhattan gumshoe pursues a convict to St. Louis, where he gets mixed up in a cop killing and nearly loses his own life at the hands of a “B” girl.

”Trouble Chaser” A starlet’s plot to blackmail a film-studio executive results in her murder. Only the “trouble chaser” can clear her volatile lover and solve the crime.

”The Missing Mr. Lee” An eccentric boarding-house denizen winds up dead; his presumed killer, a fellow boarder, has vanished. The baffling case unfolds through the testimony of witnesses, who are themselves suspects.

”Too Many Have Lived”One of only three Sam Spade short stories, this one involves a blackmailing poet, a seductive chanteuse, her rough-hewn stage-door-johnny, and, of course, murder. Recorded before a live audience in New York.

a full cast is the narrator of Black Mask Audio Magazine, Vol. 1 audiobook that was written by various authors

About the Author(s) of Black Mask Audio Magazine, Vol. 1