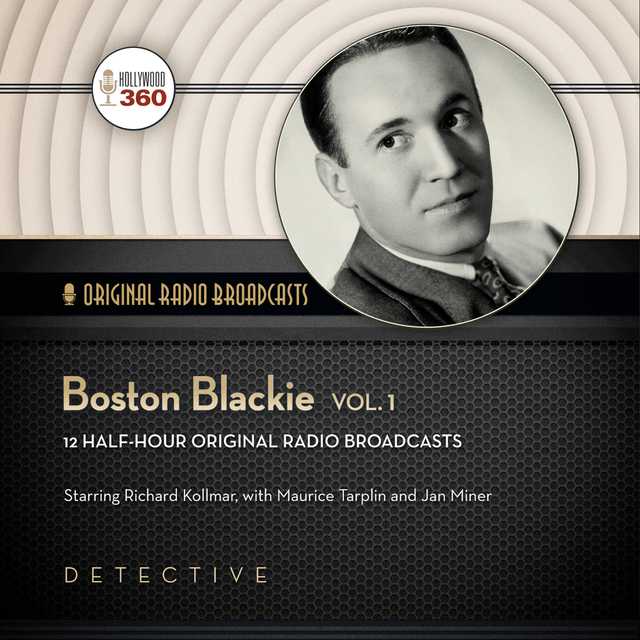 Created by author Jack Boyle, Boston Blackie was a master safecracker and hardened criminal who served time in a California prison. Rehabilitated, he decided to use his knowledge of the underworld to fight crime as an amateur detective. Known as “an enemy to those who make him an enemy, friend to those who have no friend,” Boston Blackie’s exploits were adapted to film, radio, and television. Chester Morris, who had played Boston Blackie in a series of B movies for Columbia, originated the character on radio in 1944. By 1945 Richard Kollmar had taken over the title role in a radio series syndicated by Frederic W. Ziv. Over two hundred radio episodes were produced between 1944 and 1950. While investigating the cases, Blackie would invariably encounter harebrained Police Inspector Faraday (Maurice Tarplin) and always solve the crime before Faraday could. The initial friction between Blackie and Faraday gave way as the series continued and Faraday came to recognize Blackie’s talents, occasionally even requesting his assistance. Blackie dated Mary Wesley (Jan Miner), and for the first half of the series, his best pal Shorty (Tony Barrett) was on hand. Boston Blackie transitioned to television in 1951.

Richard Kollmar is the narrator of Boston Blackie, Vol. 1 audiobook that was written by Hollywood 360

Richard
Kollmar
(1910–1971) was an actor and Broadway producer. His 1955 production of Plain and Fancy, one of the first
depictions of an Amish community in American pop culture, garnered Theatre
World Awards for three of the actors.

About the Author(s) of Boston Blackie, Vol. 1

Hollywood 360 is the author of Boston Blackie, Vol. 1

Kurzweil Vs. Read & Write: A Breakdown