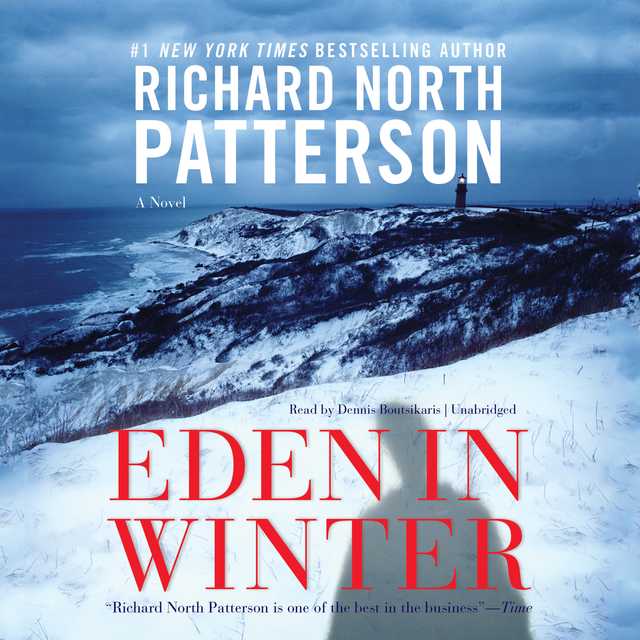 Number one New York Times bestselling author Richard North Patterson—the author of more than twenty novels, including Degree of Guilt and Silent Witness—returns with the dramatic conclusion to the Blaine trilogy: Eden in Winter, the final volume that completes the story begun in Fall from Grace.

Two months after the suspicious and much-publicized death of his father on the island of Martha’s Vineyard, it is taking all of Adam Blaine’s will to suture the deep wounds the tragedy has inflicted upon his family and himself.

As the court inquest into Benjamin Blaine’s death casts suspicions on those closest to him, Adam struggles to protect them from those who still suspect that his father was murdered by one of his kin.

But the sternest test of all is Adam’s proximity to Carla Pacelli—his late father’s mistress and a woman to whom, despite her pivotal role in his family’s plight, Adam finds himself increasingly drawn. The closer he gets to this beautiful, mysterious woman, the further Adam feels from his troubles, yet the closer he also comes to revealing the secrets he’s striven to conceal and condemning the people he’s fought so hard to protect.

An acknowledged master of the courtroom thriller, Patterson’s Blaine trilogy, a bold and surprising departure from his past novels, is a complex family drama pulsing with the tumult of the time and “dripping with summer diversions, youthful passion and ideals, class tensions, and familial disruptions” (Library Journal).

Dennis Boutsikaris received an Obie Award for his performance in Sight Unseen and was Mozart in Amadeus on Broadway. His films include *batteries not included, The Dream Team, and Boys On The Side. His TV work includes And Then There Was One, The Last Don and Chasing The Dragon; he was most recently the D.A. of NY in Sidney Lumet’s 100 Centre Street.

About the Author(s) of Eden in Winter

Richard North Patterson is the author of Eden in Winter

Richard North Patterson is the author of In The Name Of Honor, Eclipse, The Spire, Exile, The Race, Degree Of Guilt, Eyes Of A Child, Silent Witness, and many other bestselling and critically acclaimed novels. Formerly a trial lawyer, he was the SEC liaison to the Watergate special prosecutor, the assistant attorney general for the state of Ohio, and has served on the boards of several Washington advocacy groups. In 1993, he retired from his law practice to devote himself to writing. His first novel, The Lasko Tangent, was the winner of the Edgar Allan Poe Award for Best First Novel in 1980. He is a graduate of Ohio Wesleyan University and Case Western Reserve University School of Law, and is a recipient of their President’s Award for Distinguished Alumni. He lives in Martha’s Vineyard, San Francisco, and Cabo San Lucas with his wife, Dr. Nancy Clair. “Richard North Patterson is a terrific novelist.”-The Washington Post

How to use voice simulation