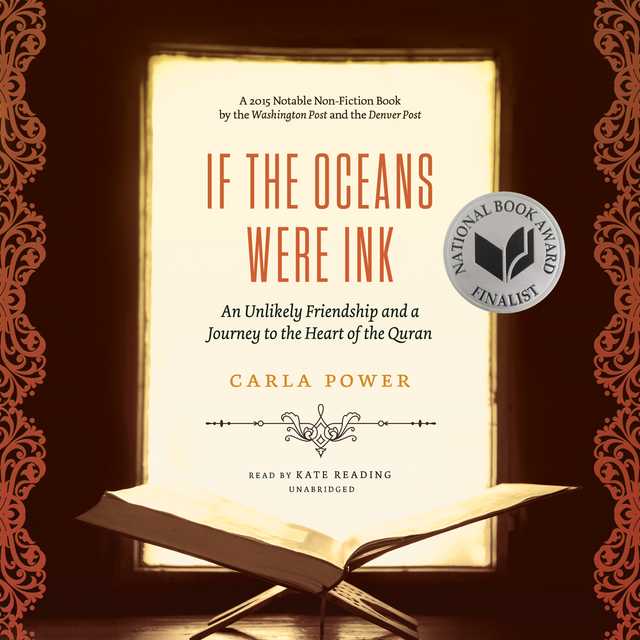 If the Oceans Were Ink Audiobook

If the Oceans Were Ink Audiobook

If the Oceans Were Ink Audiobook Summary

Hailed by the Washington Post as “mandatory reading,” and praised by Fareed Zakaria as “intelligent, compassionate, and revealing,” this powerful journey will help bridge one of the greatest divides shaping our world today.

If the Oceans Were Ink is Carla Power’s eye-opening story of how she and her longtime friend Sheikh Mohammad Akram Nadwi found a way to confront ugly stereotypes and persistent misperceptions that were cleaving their communities. Their friendship—between a secular American and a madrasa-trained sheikh—had always seemed unlikely, but now they were frustrated and bewildered by the battles being fought in their names. Both knew that a close look at the Quran would reveal a faith that preached peace and not mass murder; respect for women and not oppression. And so they embarked on a yearlong journey through the controversial text.

A journalist who grew up in the Midwest and the Middle East, Power offers her unique vantage point on the Quran’s most provocative verses as she debates with Akram at cafés, family gatherings, and packed lecture halls, conversations filled with both good humor and powerful insights. Their story takes them to madrasas in India and pilgrimage sites in Mecca, as they encounter politicians and jihadis, feminist activists and conservative scholars. Armed with a new understanding of each other’s worldviews, Power and Akram offer eye-opening perspectives, destroy long-held myths, and reveal startling connections between worlds that have seemed hopelessly divided for far too long.

If the Oceans Were Ink Audiobook Narrator

Kate Reading is the recipient of multiple AudioFile Earphones Awards and has been named by AudioFile magazine as a “Voice of the Century,” as well as the Best Voice in Science Fiction & Fantasy in 2008 and 2009 and Best Voice in Biography & Culture in 2010. She has narrated works by authors as Jane Austen, Robert Jordan, Edith Wharton, and Sophie Kinsella. Reading has performed at numerous theaters in Washington D.C. and received a Helen Hayes Award for her performance in Aunt Dan and Lemon. AudioFile Magainze reports that, “With subtle control of characters and sense of pacing, Kate’s performances are a consistent pleasure.”.

About the Author(s) of If the Oceans Were Ink

Carla Power is the author of If the Oceans Were Ink

Carla Power is the author of If the Oceans Were Ink, a finalist for both the Pulitzer Prize and the National Book Award. She was raised in St. Louis, with years in Iran, India, Afghanistan, Egypt, and Italy. Her work has appeared in numerous publications, including Time, the New York Times, Foreign Policy, Vogue, Vanity Fair, and the London Guardian.

If the Oceans Were Ink Full Details

Ultimate guide to Scribd and reviews