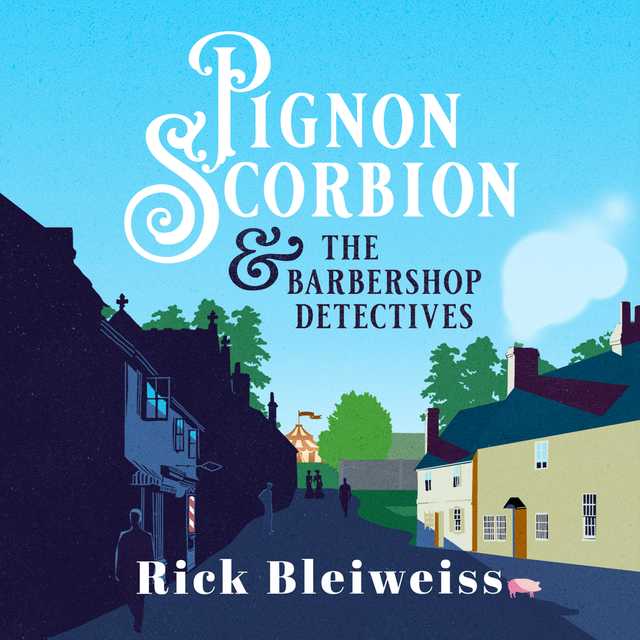 For fans of Sherlock Holmes and Agatha Christie’s Hercule Poirot, author Rick Bleiweiss’s quirky new detective and ensemble cast of characters set against the backdrop of small-town England in the 1910s will feel both comfortingly familiar and thrillingly new.

The year is 1910, and in the small and seemingly sleepy English market town of Haxford, there’s a new police Chief Inspector. At first, the dapper and unflappable Pignon Scorbion strikes something of an odd figure among the locals, who don’t see a need for such an exacting investigator. But it isn’t long before Haxford finds itself very much in need of a detective.

Luckily, Scorbion and the local barber are old acquaintances, and the barbershop employs a cast of memorable characters who—together with an aspiring young ace reporter for the local Morning News—are nothing less than enthralled by the enigmatic new police Chief Inspector.

Investigating a trio of crimes whose origins span three continents and half a century, Pignon Scorbion and his “tonsorial sleuths” interview a parade of interested parties, but with every apparent clue, new surprises come to light. And just as it seems nothing can derail Scorbion’s cool head and almost unerring nose for deduction, in walks Thelma Smith—dazzling, whip-smart, and newly single.

Christopher Toyne is an experienced actor, producer, and Emmy Award–winning director. He is the fourth generation of an established British theatrical family that includes Sir Gerald du Maurier, Daphne du Maurier, and Diana Beaumont. Having become a J. Arthur Rank contract child actor, he trained and worked as an actor in London during his youth. Some of his voice-acting credits include PBS, NPT, OPB, Microsoft, Adobe, Nike, Intel, and numerous others.

About the Author(s) of Pignon Scorbion & the Barbershop Detectives

Rick Bleiweiss is the author of Pignon Scorbion & the Barbershop Detectives

Rick Bleiweiss started his career in music as a rock performer, produced over fifty records, was a songwriter and record company senior executive, and worked with the Backstreet Boys, Kiss, U2, Whitney Houston, the BeeGees, and other industry legends. Since 2006 as a publishing company executive, he has acquired works by bestselling and award-winning authors including James Clavell, Gabriel García Márquez, Rex Pickett, and Catherine Coulter, among others. In his latest creative endeavor, Rick has crafted the Pignon Scorbion historical mystery series—blending his love of the past with the twisty deliciousness of a whodunit. Follow Rick and Scorbion at www.RickBleiweiss.com

Deepfake voices and text to speech