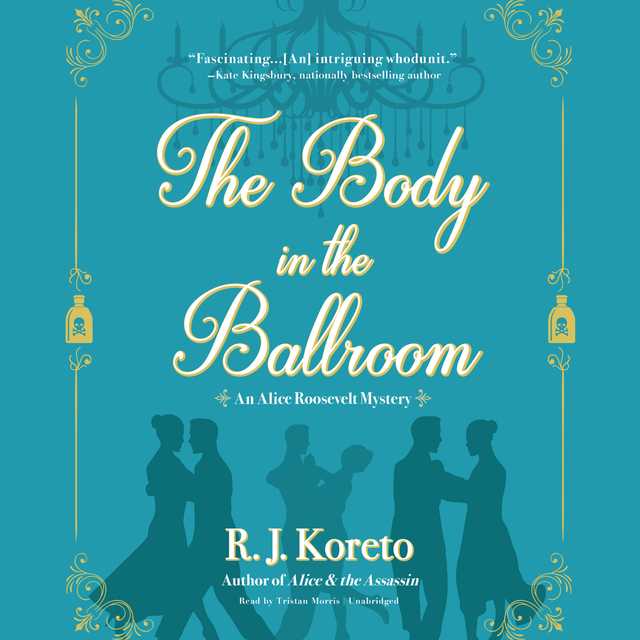 The Body in the Ballroom Audiobook

The Body in the Ballroom Audiobook

The Body in the Ballroom Audiobook Summary

President Teddy Roosevelt’s daring daughter, Alice, leaps into action to exonerate a friend accused of poisoning a man just about everyone hated.

Alice Roosevelt, the brilliant, danger-loving daughter of President Theodore Roosevelt, has already risked an assassin’s bullet to solve one murder. She never expected to have to sleuth another, but she’d never pass up the opportunity, either. Anything to stave off boredom.

And such an opportunity presents itself when Alice is invited to a lavish ball. The high-society guests are in high spirits as they imbibe the finest wines. But one man, detested by nearly all the partygoers, quaffs a decidedly deadlier cocktail. An African American mechanic, who also happens to be a good friend of former Rough Rider-turned-Secret Service Agent Joseph St. Clair, is suspected of the murder-by-poison, but Alice is sure he’s innocent and is back on the scene to clear his name.

From downtown betting parlors to uptown mansions, Alice and Agent St. Clair uncover forbidden romances and a financial deal that just might change the world. But neither Alice nor her would-be protector may survive the case at hand in The Body in the Ballroom, R. J. Koreto’s gripping second Alice Roosevelt mystery.

The Body in the Ballroom Audiobook Narrator

Tristan Morris is the narrator of The Body in the Ballroom audiobook that was written by R. J. Koreto

Tristan Morris is an AudioFile Earphones Award-winning audiobook narrator who originally hails from Seattle, Washington. He currently lives in New York City with his wife and daughter. He studied theater and philosophy at Pacific Lutheran University and proceeded to earn his MFA in acting from the New School for Drama in Manhattan. Tristan is a proud member of SAG-AFTRA and Actors’ Equity.

About the Author(s) of The Body in the Ballroom

R. J. Koreto is the author of The Body in the Ballroom

R. J. Koreto, novelist, is a business and financial journalist. Over the years, he has been a magazine writer and editor, website manager, PR consultant, book author, and seaman in the US Merchant Marine. Like his character, Lady Frances Ffolkes, he is a graduate of Vassar College.

The Body in the Ballroom Full Details