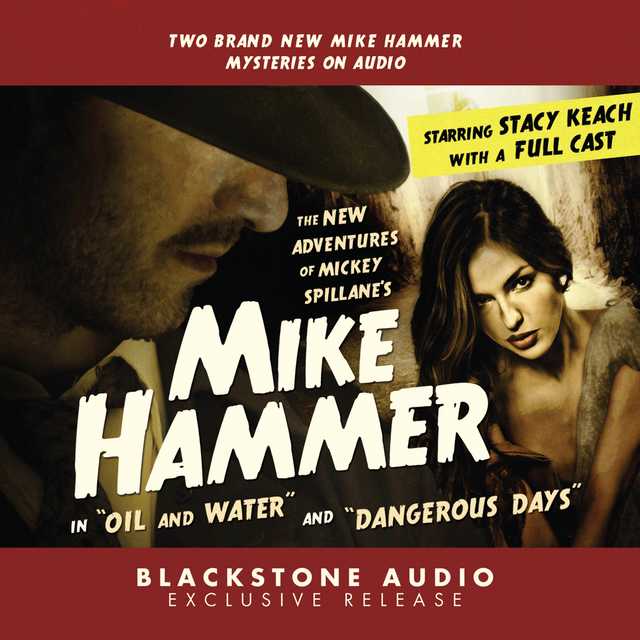 ”I don’t want to arrest anyone. I just want to shoot somebody.”—Mike Hammer

Everybody loves a mystery, and nobody solves them like Mike Hammer. While other detectives bend and manipulate the law, Hammer holds it in total contempt, seeing it as nothing more than an impediment to justice, the one virtue he holds in absolute esteem. Now, the no-holds-barred private eye returns, along with his gorgeous secretary, Velda, and a collection of New York City characters, in two fully dramatized “theater-of-the-mind” audio adventures. “Dangerous Days” and “Oil and Water.”

”Dangerous Days” – When Hammer rescues a crazed young woman clad only in a medical gown, he’s flung into the shadowy world of secret ops and international terrorism. New York is the target, and Mike Hammer is the only man who can prevent a massive catastrophe. But will he find out who the real enemy is before it’s too late?

”Oil and Water” – The one woman Mike Hammer might have married is back in town. But when she’s murdered after making an appointment with her ex-lover, Mike winds up investigating a massive conspiracy involving a powerful oil company. Hammer thinks he’s close to the truth, but has he been played for a sucker all along?

Narrated by Stacy Keach, the acclaimed actor who starred in the original Mike Hammer TV series, these new mysteries are written by the writers of that show and enhanced with a full supporting cast, sound effects, and music. Even the show’s jazzy theme song is back to set the gritty tone for each episode.

Stacy Keach is the narrator of The New Adventures of Mickey Spillane’s Mike Hammer, Vol. 1 audiobook that was written by M. J. Elliott

Stacy Keach is perhaps best known for his portrayal of hard-boiled detective Mike Hammer. He played Ken Titus on the sitcom Titus, Warden Henry Pope in the hit series Prison Break, and has been seen in numerous film and stage productions. He won a Golden Globe for his portrayal of Ernest Hemingway and starred as Richard Nixon in the US National Tour of Frost/Nixon. His performance in the title role of King Lear has received international acclaim.

About the Author(s) of The New Adventures of Mickey Spillane’s Mike Hammer, Vol. 1

M. J. Elliott is the author of The New Adventures of Mickey Spillane’s Mike Hammer, Vol. 1

M. J. Elliot is the author of numerous radio dramatizations, including the Vincent Price series and the Father Brown audio dramas.

Why does dyslexia make reading difficult?