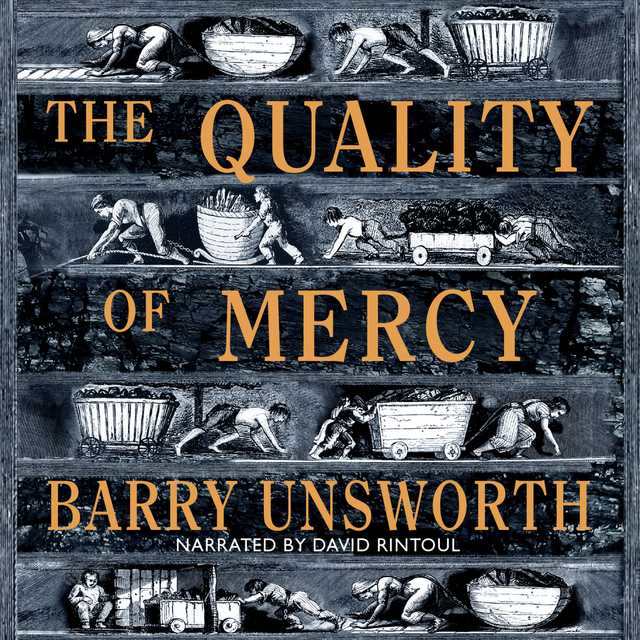 The Quality of Mercy Audiobook

The Quality of Mercy Audiobook

The Quality of Mercy Audiobook Summary

Barry Unsworth returns to the terrain of his Booker Prize–winning novel Sacred Hunger, this time following Sullivan, the Irish fiddler, and Erasmus Kemp, son of a Liverpool slave ship owner who hanged himself. It is the spring of 1767, and to avenge his father’s death, Erasmus Kemp has had the rebellious sailors of his father’s ship, including Sullivan, brought back to London to stand trial on charges of mutiny and piracy. But as the novel opens, a blithe Sullivan has escaped and is making his way on foot to the north of England, stealing as he goes and sleeping where he can.

His destination is Thorpe in the East Durham coalfields, where his dead shipmate, Billy Blair, lived: he has pledged to tell the family how Billy met his end.

In this village, Billy’s sister, Nan, and her miner husband, James Bordon, live with their three sons, all destined to follow their father down the pit. The youngest, only seven, is enjoying his last summer aboveground.

Meanwhile, in London, a passionate antislavery campaigner, Frederick Ashton, gets involved in a second case relating to the lost ship. Erasmus Kemp wants compensation for the cargo of sick slaves who were thrown overboard to drown, and Ashton is representing the insurers who dispute his claim. Despite their polarized views on slavery, Ashton’s beautiful sister, Jane, encounters Erasmus Kemp and finds herself powerfully attracted to him.

Lord Spenton, who owns coal mines in East Durham, has extravagant habits and is pressed for money. When he applies to the Kemp merchant bank for a loan, Erasmus sees a business opportunity of the kind he has long been hoping for, a way of gaining entry into Britain’s rapidly developing and highly profitable coal and steel industries. Thus he too makes his way north, to the very same village that Sullivan is heading for …

The Quality of Mercy Audiobook Narrator

David Rintoul, an Earphones Award–winning narrator, is a stage and television actor from Scotland. A former student of the Royal Academy of Dramatic Art in London, he has worked extensively with the Royal National Theatre and the Royal Shakespeare Company. He has also appeared regularly on BBC television, starring as Mr. Darcy in the 1980 adaptation of Pride and Prejudice and as Doctor Finlay in the television series of the same name.

About the Author(s) of The Quality of Mercy

Barry Unsworth is the author of The Quality of Mercy

Barry Unsworth (1930–2012) was a British novelist who wrote historical fiction. He won the Booker Prize with Sacred Hunger and was shortlisted for Pascali’s Island and Morality Play. He published seventeen novels to critical acclaim.

The Quality of Mercy Full Details

Text to speech for doctors