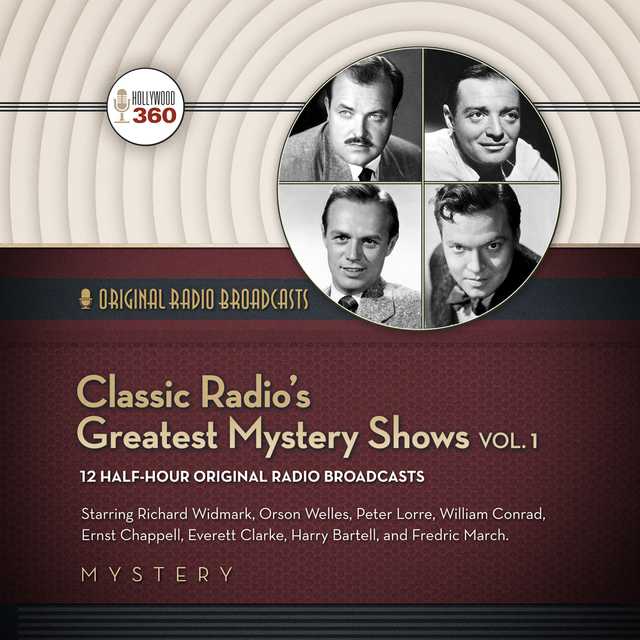 This collection contains twelve of the greatest mystery shows ever broadcast during the golden age of radio! You’ll hear Richard Widmark starring in Inner Sanctum Mysteries, Orson Welles in The Black Museum, Peter Lorre in Mystery in the Air, William Conrad in The Whistler, Ernest Chappell in Quiet, Please, Everett Clarke in Lights Out, Harry Bartell in Escape, and Fredric March in a tale well calculated to keep you in Suspense, plus such others as The Weird Circle, Molle Mystery Theatre, The Hall of Fantasy, and Crime Classics. Pull the covers up close and relive twelve of the best classic radio mystery shows from yesterday and the legendary stars who made them great in this incredible collection.

Crime Classics, “Blackbeard’s Fourteenth Wife and Why She Was No Good for Him,” starring Lou Merrill

The Hall of Fantasy, “Death in the Bayous,” starring Richard Thorne

Lights Out, “The Battle of the Magicians,” starring Everett Clarke, written and directed by Wyllis Cooper

Mystery in the Air, “Beyond Good and Evil,” starring Peter Lorre

Quiet, Please, “The Thing on the Fourble Board,” starring Ernest Chappell

The Weird Circle, “The Murders in the Rue Morgue,” by Edgar Allan Poe

Richard Widmark is the narrator of Classic Radio’s Greatest Mystery Shows, Vol. 1 audiobook that was written by Hollywood 360

About the Author(s) of Classic Radio’s Greatest Mystery Shows, Vol. 1

The ultimate guide to Play.ht

Where to find work in accessibility