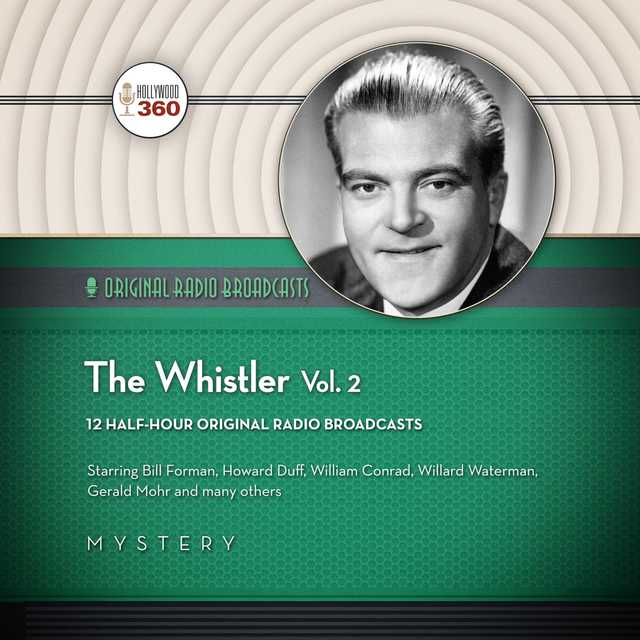 The Whistler was one of radio’s top mystery programs airing from May 16, 1942 until September 22, 1955. The Whistler was an ominous narrator who opened each episode with, “I am the Whistler, and I know many things, for I walk by night. I know many strange tales, many secrets hidden in the hearts of men and women who have stepped into the shadows. I know the nameless terrors of which they dare not speak.” The opening dialog was heard over the echo of footsteps and Wilbur Hatch’s haunting signature thirteen-note theme, whistled each week by Dorothy Roberts. The stories followed an effective formula in which a person’s criminal acts were typically undone by their own missteps. The Whistler narrated, often commenting directly on the action in the manner of a Greek chorus, taunting the criminal from an omniscient perspective.

One of the show’s trademarks was the ironic twist endings that helped serve as a payoff for the listener. Bill Forman had the title role of host and narrator the longest. Others who portrayed the Whistler included Gale Gordon, Lucille Ball’s future television costar; Joseph Kearns, Mr. Wilson on the television series Dennis the Menace; Marvin Miller, soon to be television’s Michael Anthony on The Millionaire; Bill Johnstone, the Shadow on radio from 1938–1943; and Everett Clarke.

Bill Forman is the narrator of The Whistler, Vol. 2 audiobook that was written by Hollywood 360

Bill Forman was the longest-running narrator for the popular CBS Radio show The Whistler.

About the Author(s) of The Whistler, Vol. 2

Hollywood 360 is the author of The Whistler, Vol. 2