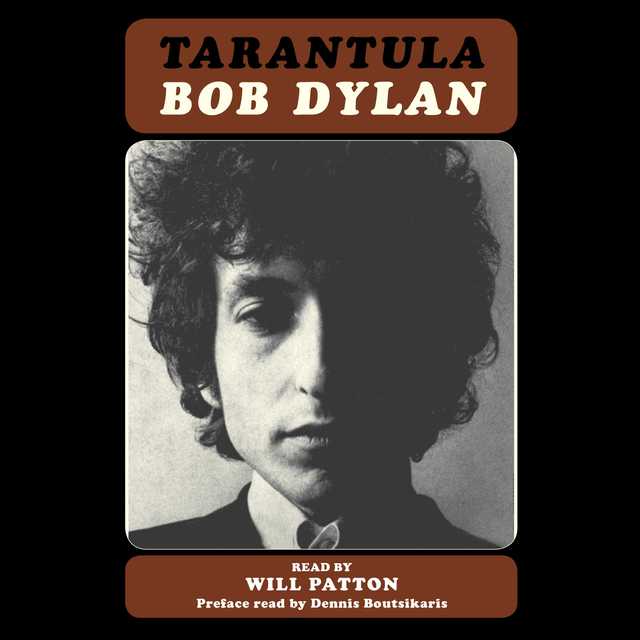 WINNER OF THE NOBEL PRIZE IN LITERATURE

Music legend Bob Dylan’s only work of fiction—a combination of stream of consciousness prose, lyrics, and poetry that gives fans insight into one of the most influential singer-songwriters of our time.

Written in 1966, Tarantula is a collection of poems and prose that evokes the turbulence of the times in which it was written, and gives a unique insight into Dylan’s creative evolution. It captures Bob Dylan’s preoccupations at a crucial juncture in his artistic development, showcasing the imagination of a folk poet laureate who was able to combine the humanity and compassion of his country roots with the playful surrealism of modern art. Angry, funny, and strange, the poems and prose in this collection reflect the concerns found in Dylan’s most seminal music: a sense of protest, a verbal playfulness and spontaneity, and a belief in the artistic legitimacy of chronicling everyday life and eccentricity on the street.

Will Patton’s film credits include Halloween, Boarding School, Megan Leavey, American Honey, Meek’s Cutoff, A Mighty Heart, Remember the Titans, The Mothman Prophecies, Armageddon, and No Way Out. He starred in Swamp Thing on the DC Universe streaming platform and was seen in five seasons of the TNT series Falling Skies. He has won Obie Awards for his performances in Fool for Love and What Did He See? He is also known for his audiobook recordings of the work of Stephen King, James Lee Burke, Denis Johnson, and William Faulkner.

About the Author(s) of Tarantula

Bob Dylan is the author of Tarantula

Bob Dylan has released thirty-nine studio albums, which collectively have sold over 125 million copies around the world. He won the Nobel Prize in Literature and has been awarded the French Legion of Honor, a Pulitzer Prize Special Citation, and the Presidential Medal of Freedom, the country’s highest civilian honor. His memoir, Chronicles: Volume One, spent a year on the New York Times bestseller list.